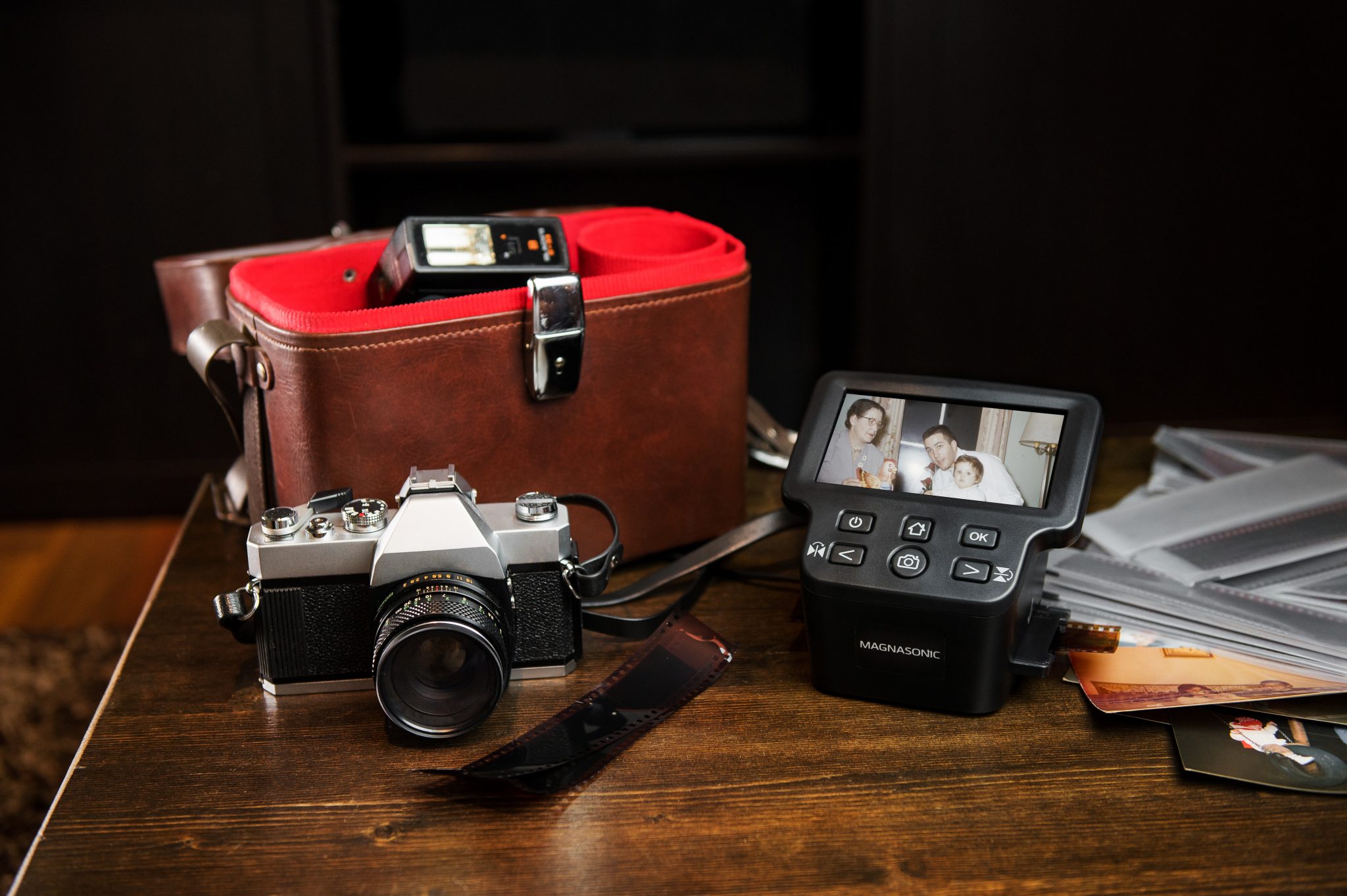 Like other forms of analog media, film photography and development has an undeniable charm and fascination about it. This curiosity isn’t just from professional hobbyists either. Whether you are exploring film photography for the first time or looking for the best way to develop a film roll you found in your photo box, we have put together a guide to explain common photo film types, formats, and sizes.

Put simply, photographic film is a flexible strip of transparent cellulose coated with a light-sensitive emulsion, used to produce photographs or motion pictures. The first thing to understand is the difference between negative film and reversal film. Identifying which film type you have, or want to capture, will help determine the best method for developing your film.

Negative film captures an image as a “negative”, which means colors and values are inverted; light tones are portrayed as dark, and vice versa. The brighter the light, or longer the exposure of light, the darker the result of the developed image. This film type is good for preserving details in high-contrast situations.

Reversal film, also known as “slide” film, captures images as a “positive”, producing lighter tones as brightness or light exposure goes up, and darkness in areas that have little exposure. Reversal film replicates color and values directly, as a result, capturing a rich range of colors and tones with less grain and sharper images than negative film. 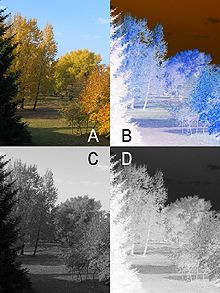 Slide film, also known as ‘color reversal’ or ‘color positive’ film, is the opposite of color negative film and black and white film. When processed, the film reveals the actual, positive colors and tones of the image present during exposure. Therefore, it is very similar to a digital image; what you see is what you get (see image A).

Slide film is typically used for 35mm film cameras and medium format film cameras. The ISO film speed is slow, making it more difficult to use in photography. Therefore exposure must be very precise. Modern-day color reversal film is developed using the E-6 process. This process is common in professional photo labs, but your local store may require shipping it out. You can convert your own slide film into high-quality digital images to share with your friends and family by using a film slide scanner.

Color negative film, sold as a long strip on a spool, has a much wider exposure latitude and shows color and values as inverted (see image B). This is the film commonly found in disposable cameras you purchase from a convenience store.

These films use a standard developing process, called C-41, and are less expensive to develop compared to color reversal film. Once the image is exposed, it creates a negative of the image, and when you print that image, it creates a negative of the negative, which makes it positive. If your negative film has an orange tint, don’t panic. When negative film images are brought into the digital realm, their contrast and color balance may be adjusted at the time of scanning.

Black and white negative film shows the image inverse; all areas that appear clear/white on the film will be black in print, and all black areas of the film will be white. (see image D) This film has its own developing process, different from that of color film, but can also be digitized using a film scanner.

A common question is, what is the best film format? The answer is simple; there is no best film format. The format you use is dependent on the type of photography you are going to do and results you are looking to achieve.

The best way to determine the photo format you want to use is by researching other photographers’ images, look at the format and type used, and determine your photo shooting style.

In 1889, 35mm film was developed and made at Thomas A. Edison’s New Jersey Lab. Edison split 70mm roll film to make the 35mm variety, describing it as a sprocket wheel-powered long band with double perforation.

135 film has a standardized frame size of 24x36mm, with enough film for 12, 24, or 36 frames. The 135 film format was the most used film format for amateur photographers before digital cameras, most likely due to its smaller size and easy portability.

126 film roll was made for film with 35 mm width and paper backing. Kodak brought the 126 film to the market in the early 1960s in response to customer complaints about the challenge of loading/unloading cameras reliant upon roll fills. Cartridge film does not require the attachment of the film leader to the spool for take-up; Rather, the cartridge moves directly into the unit. This asymmetric cartridge requires the back to be closed before winding and shooting. 126 cameras are designed with a window to display the back part of the cartridge, whereupon film details are printed. There is also a diminutive hole that shows the frame number printed along the backing paper.

This film debuted in 1935, serving as a paper-backed, 35mm roll film. Kodak brought the 828 film to market to sidestep issues that arose with the initial perforated 35mm film. The spool’s comparably small diameter suited comparably small cameras quite well.

The main distinction medium format film has over 135 format is its larger size, allowing images more resolution, less grain, and a wider range of colors. Images are anything larger than 24 x 36mm and smaller than 4 x 5in; but its most common image sizes are 6 x 4.5cm, 6 x 6cm, and 6 x 7cm, with enough film for 10-15 frames.

All medium format cameras use 120 film as the standardized format. Brought to market by Eastman Kodak in 1901, for the company’s Brownie No. 2 box camera, the 120 film format was a favorite among beginning photographers. The film is held in an open spool originally made of wood with metal flanges, later with all-metal, and finally with all-plastic.

In 1965, 220 film was introduced with the same width as 120, but double in length; meaning there was twice as many exposures per film roll. 220 film does not use backing paper behind the film, instead a leader and trailer for light protection. Although the longer film was attractive to professional photographers, 220 film came with its downsides.

Without the backing paper, it cannot be used on camaras lacking the red window that served as a frame number marking indicator. Additionally, there was potential for light stemming from the window, causing the film edges to develop fog. The actual film was comparably thinner than that with backing paper, meaning a pressure plate occasionally required nuanced positioning to provide the ideal focus.

All combined, 220 film was difficult and expensive to develop. As of 2018, all production of 2020 film has currently stopped worldwide.

620 roll film copied 120 roll film’s width and length, meaning both films rolls produced the same picture size. The only difference was the spool used to hold the film in place; the 620 roll spool core and end flanges were smaller to allow placement in thinner camaras. It’s speculated that the 620 roll was discontinued in 1995 due to professional photographers’ hefty investments in equipment for 120 film size. The last Kodak 620 format camera made is believed to be the Kodak Brownie Reflex 20.

Large format is supplied on individual sheets, rather than rolls, for image sizes 4 x 5in or larger. In comparison, it’s 15x the area of a 35mm frame. The biggest advantage of large format is the high resolution using larger pixels, making images sharper without having to enlarge. Its most common image sizes are 4 x 5in, 5 x 7in, and 8 x 10in, single sheets.

Other Popular Film Formats and Sizes

In 1932, Easton Kodak introduced two new negative film formats; 116 and 616 roll film. Though the 116 film mimicked the 616 70mm wide format, the 616 format was distinct in that it was wound with comparably diminutive spools. These spools permitted a better fit with small cameras.

Placed between 35mm and medium format in size, 127 roll film popularity and early success stemmed from its affordability and ease of use during the Great Depression. It was originally made for the “Vest Pocket Kodak” folding camera to store eight pictures in 4 x 6.5cm format, giving it the byname “Vest Pocket film”. Manufacturers began compressing sixteen 3 x 4cm exposures onto a roll to give consumers more photos and keep sales stable.

This paper-backed roll film peaked once again in the 1950’s as more amateur-friendly cameras were released, including the Kodak Brownie 127, Imperial Satellite, Baby Rolleiflex and Zeiss Ikon Kolibri. Kodak stopped producing 127 roll film in 1995 after being crushed by the introduction of 110 film. Other manufacturers followed suit, but 127 film can still be purchased black-and-white under the Rera Pan brand manufactured in Japan.

110 film was introduced in 1972 by Kodak, as a miniature version of the earlier 126 film format, in response to customer complaints about the process necessary to load/unload roll film cameras. The diminutive size makes it challenging to enlarge and provide high-resolution scans. This film is commonly tied to prints and scans lacking visual precision. You can still process your 110 film negatives, and use a film scanner to digitize the photos into a higher resolution.

This film reached the masses in 1996, serving as an alternative to 110 film. APLS cartridges were designed for automatic loading, enclosing film of 24 mm width in full when not in use. It is particularly interesting to note the slightly exposed films and door had the potential to be removed and subsequently reused later on. Furthermore, this variety of film was put right back into the cartridge and returned to the photographer after development.

This seemingly primitive technology eventually gave way to digital picture-taking on smartphones. You can bring back the memories and preserve your film by converting them into digital files using an all-in-one film scanner and transferring the digital files to your computer so they can be saved, shared, and viewed on a bigger screen.